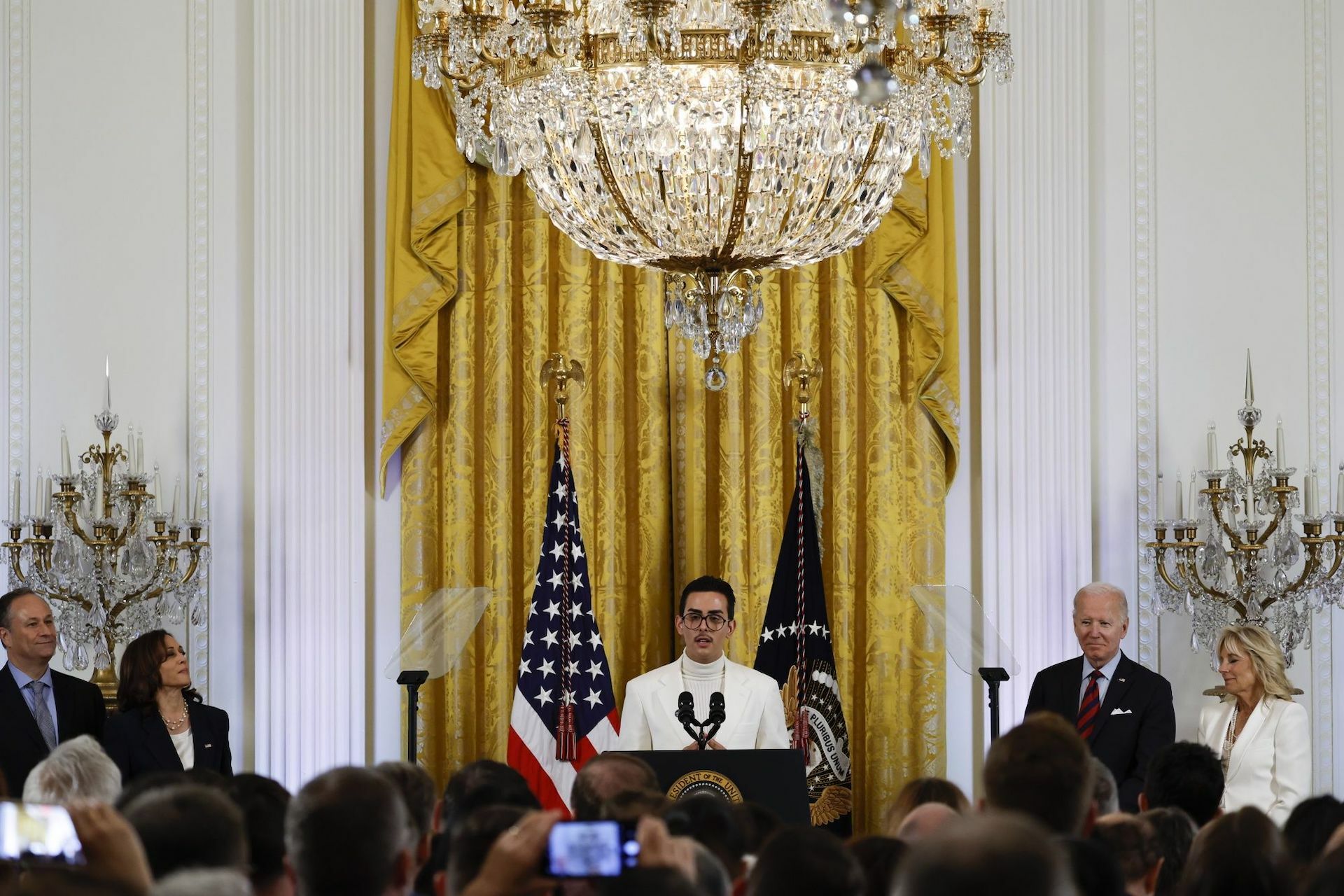 Javier Gomez recently arrived at the White House wearing a sharp cream suit and turtleneck for a moment his younger self could've never imagined.

The 18-year-old activist from Miami, who'd organized a walkout at his high school to protest Florida's "Don't Say Gay" bill months earlier, had been chosen to deliver remarks at the Biden Administration's Pride Month celebration. At the event, the president signed an executive order directing the federal government to reduce youth exposure to conversion therapy and better support both LGBTQ youth in the foster care system and queer adoptive parents, among other measures.

Following an introduction by First Lady Jill Biden, Gomez beamed at the podium. Then he told a story. At 5 years old, Gomez knew he was gay — he just didn't have the language to express it. His classmates bullied him for being "too gay, too feminine, or too outgoing." But an openly gay teacher who created a welcoming classroom environment in the 5th grade changed what Gomez believed was possible for himself.

"To see his happiness in life gave me hope in my life that my future would be better," Gomez later told Mashable.

That teacher's example is partly why Gomez fought the passage of the Parental Rights in Education bill, which critics dubbed the "Don't Say Gay" bill. Gomez fears that the bill, which goes into effect July 1, will silence educators who are supportive of LGBTQ youth. The bill prohibits any discussion about LGBTQ issues from kindergarten until third grade. Conversations about those subjects for older students must be "age appropriate or developmentally appropriate." If parents disapprove of related instruction, they may sue the district. Critics, including Gomez, argue the bill could lead educators to censor what they share about themselves as well as avoid addressing gender identity and sexual orientation in the classroom.

Tweet may have been deleted (opens in a new tab)

So in February, Gomez lobbied against the bill in Tallahassee. The following month, he led the walkout at iPrep Academy, joined by 100 students, per his estimate.

Gomez is one of numerous young queer activists who have urgently fought the bill, which passed by five votes soon after the walkout. These organizers rallied their peers and gave testimony, which often made them targets for bullying and hate speech on social media. They've had to decide how vocal to be when it might endanger their mental health and physical safety. And despite the law's passage, they continue to organize against the bill, knowing the road ahead won't be easy.

"I want to represent those kids at my school that really didn't have a voice or the luxury of coming out and being proud of themselves amongst their family and friends," says Gomez. "When I went up [to Tallahassee], I knew I was fighting for myself, but I was fighting for those kids."

When high school senior Will Larkins testified in April at the Seminole County School Board to protest the law, Twitter users quickly shared the video of his impassioned speech. Like Gomez, Larkins described how hopeless he felt as a child who knew he was different but couldn't name how.

"It scares me, because what I went through is now being forced onto an entire generation of queer kids," Larkins told Mashable.

Tweet may have been deleted (opens in a new tab)

Speaking up, however, has meant receiving vitriolic messages online. Larkins suspects that he wasn't confronted by adults at legislative hearings because he's still a minor at 17 years old. He feels that the burden of organizing and protesting shouldn't rest primarily on youth trying to enjoy what's left of their adolescence and plan for their future, or on LGBTQ teens who can't advocate for themselves because the risks of coming out publicly are too high.

By attending hearings and sharing his personal story, Larkins hoped to reach people who considered themselves neutral in the debate or allies to students like him. He believes that if those groups take a public stand collectively with activists, they can outnumber the bill's advocates.

"Show up at the polls and vote," says Larkins, encouraging allies. "If I organize a protest, just show up and show that you care about this issue. I know so many people who could be organizers...but their family isn't supportive, so they can't fight for their right to be queer."

Maxx Fenning, a 20-year-old college student at the University of Florida who also testified in Tallahassee, was prepared to become a target of the bill's proponents. What he didn't expect was to be called a "groomer" by them on social media. The slur, which falsely implies that LGBTQ people prey on or sexually abuse children, became resurgent once Florida Gov. Ron DeSantis' spokesperson, Christina Pushaw, described the legislation as an "anti-grooming bill" on Twitter.

Still, Fenning says he's determined to provide LGBTQ youth with information about sexuality and gender identity. Fenning leads the nonprofit group PRISM, which offers educational resources about LGBT+ sexual health and history. The group started as a fledging student club at Fenning's Boca Raton high school when he realized that even as an openly gay student leader, he'd never learned about the gay rights leader Harvey Milk and the transgender activist Marsha P. Johnson, or the HIV-prevention medication PrEP.

SEE ALSO: Why the 'groomer' smear is terrible for LGBTQ mental health

"You would think I would know this information, even in that position, and I didn't know that information, and that didn't sit well with me," says Fenning, who adds that the school never sanctioned PRISM as an official club.

Fenning worries that the bill may have a chilling effect on LGBTQ student-led clubs. Though the legislation focuses on classroom discussion about LGBTQ issues, Fenning says its vagueness about what's acceptable may discourage students and staff advisors from having candid conversations. Advocacy groups have filed lawsuits to block the bill, arguing that it violates free speech, among other Constitutional rights. If these lawsuits don't succeed, Fenning and other activists will be closely watching how enforcement plays out.

Dr. Cecil Webster, a psychiatrist who works with LGBTQ youth, says that young activists should prioritize their physical and emotional well-being, even as their work feels increasingly urgent. And prior to going public, Webster recommends taking stock of the risks and what kind of support to expect from friends and family.

Though Webster's practice is in Boston, he regularly hears from youth affected by what's happening in Florida and other states. Not only are they worried about attending college in a state that's hostile to LGBTQ rights, for example; but also, they're internalizing the significance of legislation that targets queer and trans youth.

"These young folks, as a society, are seeing messages that they're not unconditionally loved," he says, noting that research points to acceptance at home and in communities as a critical factor for LGBTQ youth mental health. Lack of acceptance can be particularly compounded for queer youth of color, who face discrimination based not just on their sexual orientation or gender identity, but because of their racial and ethnic identity as well.

Gomez felt this deeply as a Venezuelan-American whose gay identity hasn't always been accepted by family or community members. But when he proclaimed from the White House podium that he was a "proud, gay, Venezuelan-American," the audience cheered loudly.

Gomez says he won't forget this moment anytime soon — and that it made his public advocacy over the past few months more fulfilling than he could've imagined.

"It empowers me even more...," says Gomez. "It was really, really amazing understanding that someone that didn't really have a voice and was silenced in his younger age now has this powerful voice advocating for people like me. It's beautiful, and I'm so eternally grateful that I was given this platform."